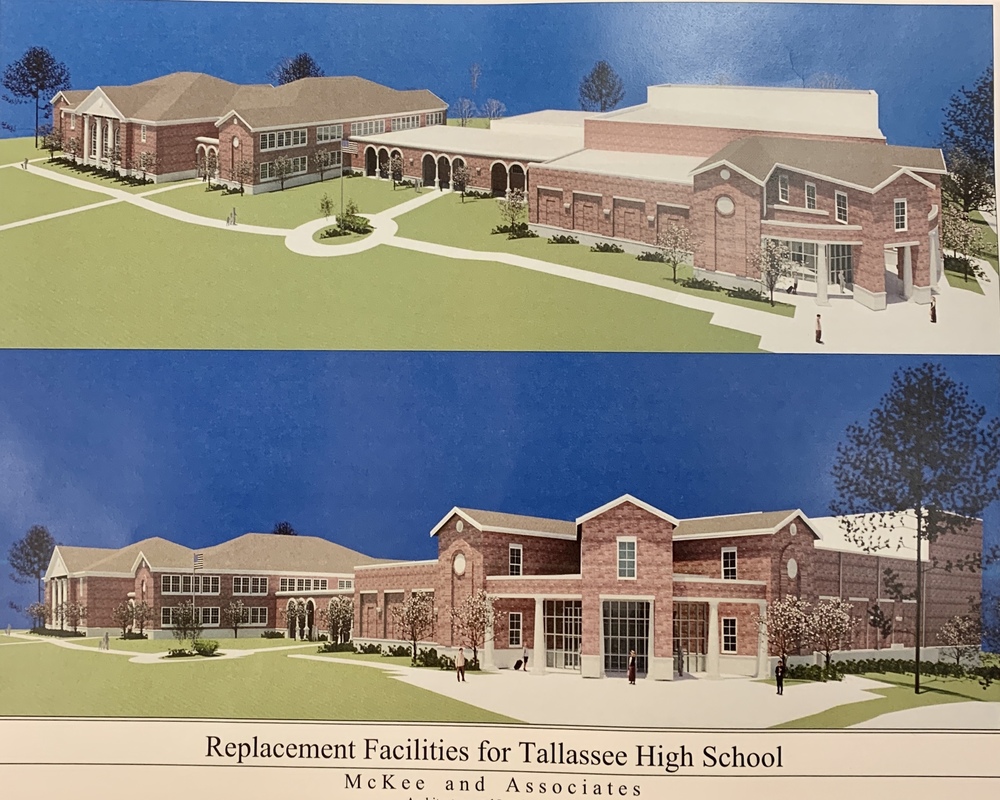 ANSWERS TO FREQUENTLY-ASKED QUESTIONS ABOUT THE NEW HIGH SCHOOL

Bids were opened on October 1 for building construction on the Tallassee High School campus. The School Board is set to award the contract at its monthly meeting, and we offer these answers to questions that are often asked about the project.

(All of what follows has been made public in previous work sessions and school board meetings.)

Q—So what are we really getting? I keep hearing different stories.

A—The contract calls for tearing down the main THS building and replacing it on the same site with a building matching the architectural style of the old one. There will also be an attached building, sitting approximately where Preer Street used to run beside the school. That building will house an auditorium and music facilities. All other structures will remain for now; the reasonable assumption is that they will be replaced sometime in the future.

Q—But I had heard that the plan was to remodel the existing building. Not so?

A—That was indeed an option discussed early in the process. After hearing reports from the City Fire and Police surveys (concerning fire hazards and security issues), and after determining the cost and feasibility of expanding the auditorium (or somehow making that space useful if the auditorium were replaced), the decision was made to abandon that option.

Q—So why is this needed anyway, all of a sudden?

A—Let’s be clear:  it’s not “all of a sudden.” Every year, each school district is required to submit to the State Board of Education a Five-Year Plan of priority capital improvements. Going back at least fifteen years, the Tallassee City Schools’ Five-Year Plans have listed “new high school” and “new music facility.” As far back as 2000, the Plan called for the purchase of land adjacent to THS. So this is not a new need. Every School Board and every Superintendent going back at least that far have recognized it. We are finally addressing the needs.

Q—What “needs,” exactly? This is a historical building that has been sufficient for a long time.

A—Yes, it has been here a long time-- for 92 years in fact. But it has not been sufficient for all that time. We already mentioned the issues of fire and security, which are primary. Beyond that, the two areas that have long been inadequate in terms of size, are the auditorium and the music facilities. The student body outgrew the auditorium seating capacity years ago. The auditorium stage has been too small to accommodate music performances for a decade or more. As those music programs expanded, the band could no longer fit everyone on stage, even after the stage was extended forward (taking out more seating in the process). The stage itself, and lack of backstage and dressing areas, have long been bottlenecks for the choir program. The band, its instruments, and uniforms, cannot fit in the band room, and the choir has to make use of a portable building to handle some of the classes. For the better part of the past twenty-five years, the band and choir staffs have done wonders in building impressive programs in the face of these impediments.  And the administration has managed in an auditorium too small for the student body. But the students deserve better than that—at the very least, room into which they can all fit.

Q—So why has this taken so long? The Council passed the new sales tax (part of which goes for this project) a couple of years ago.

A—Because the Superintendents and Board have been very, very conscientious about getting as much of what we need for the money we are willing to commit. As noted earlier, more than one building option has been explored. And, more than one funding scheme has been examined as well. We do not want to put the school system in a position of having to make cuts in programs or personnel in order to make the payments on this project somewhere down the road.

Q—So you are guaranteeing that won’t happen in the thirty years it’s going to take to pay this off?

A—No.   Nobody can make a guarantee like that about the economy thirty years ahead. Or even one year. But if we use that as an excuse, we can guarantee that our students and staff will continue to have to live with inadequate facilities. We have been able to get money at historically-low rates (see below) such that we feel very comfortable about being able to make the payments.

Q—So it’s a thirty-year commitment?  For how much?

A— Just as the City was recently able to refinance their bonds on such good terms,  that same financial environment meant that we were able to issue $16.5 million worth of bonds going out thirty years, at the lowest rate in U.S. history! Plus, this year Alabama is offering each school system state bond money for projects such as this. It’s no stretch to say that we are embarking on this project on the most favorable financial terms we could have imagined. With prudent planning, re-design, and patience, we will have saved an estimated $3.5 million over the life of the bond issue.

A—Plans call for construction on the auditorium/music facility to begin in November of this year, and end in March of 2022. Demolition of the main building is to begin in June of 2021, with a goal of completion in time to move in by August, 2022.

This project will go a long way toward giving the students, faculty, and administration a high school campus that meets their needs. Will other buildings have to be worked on in the future? Absolutely. But this answers the most pressing needs right now, and sets us up to have a more secure overall campus when future construction is undertaken. Besides meeting the obvious necessities, it is reasonable to expect this to have a positive impact on the school itself and on the city in the long run. Our city’s willingness to invest in its schools cannot help but make a favorable impression on families considering locating here, on quality educators looking for employment, and on businesses looking to build.

The schools are just as much a part of the town’s infrastructure as gas and water lines. The taxpayers, Mayor, and Council, can all be proud of the commitment that has been made, and the results which will follow.